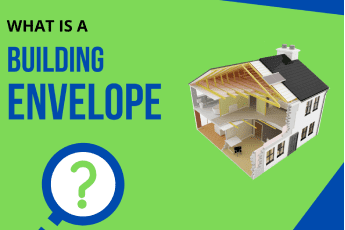 So what is a Building Envelope and what does it actually mean?

In this article, we’ll assist builders and contractors in understanding the mechanism of the building envelope to identify the major faults in building structures for the purpose of enhancing air sealing and creating more building structures that are feasible & cost-effective in all environmental conditions. Let’s understand this concept of Building Envelope closely to get a more clear vision.

It is defined as the physical wall or barrier between the interior and exterior surroundings of a building structure including the resistance to water, air and heat, noise, and light transmission.

1 – In the rainy season, we use raincoats & umbrellas, we dress well in the season of winter & cold and still we expect from our homes to provide protection from the exterior environmental conditions.

2 – If we talk about walls, roofs, doors, windows etc. they all play a major role in building envelope.

If we can summarize it in one simple line definition then it may also be defined as the exterior layer or shell of a building that repel the surrounding elements. It is essential to remember that these are mixed layers. Each coating of building envelope has its own importance which consists of smaller pieces that working together to provide a structural support. Hope you have some basic understanding of the concept “Building Envelope”.

So why there is a requirement for building envelope arises? What is the importance of a building envelope? All we’ll discuss in this part. A structure envelope is normally characterized as the division of the inside and outside of a structure. It works with environment control and ensures the indoor climate. Generally, it is the whole outside building framework. It incorporates entryways, windows, rooftop, establishment, floor, siding, and every one of the parts like primary brickwork and protection. As discussed in the part of the definition that the whole mechanism of the building envelope is based on the four critical functions such as

Functions of the Building Envelope (Mechanism)

A building envelope works on the basic three functions such as control, moisture, air & thermal that are characterize as control functions

Moisture Control: The moisture control is basically defined as the ability to regulate the transfer of moisture. Moisture can extremely impact on the overall performance of the building over your head (the upper part), the basement part and walls.

This should be taken care that all the components must be carefully addressed to get protection from unwanted transfer from causing severe damage.

Thermal Control: If we talk about thermal transfer it means that how comfortable we feel inside our houses.

The whole foundation of the building envelope is totally depends on the strength of its support on which a structure will stand out.

For Example: External loads and forces can be Rain, thunderstorm or any other extreme environmental conditions.

The finish process is also known as the aesthetic. To make the building look more attractive while performing support and control functions.

What Makes Up the Building Envelope?

The building envelope is made up of the 5 major elements that we’ll discuss further in this article.

What are the Five Elements of Building Envelope System?

The building envelope includes the materials that contain the following 5 elements as listed below:

The associations and compatibility between these components is basic to guarantee that the building envelope function as expected.

So what does a foundation means? As its name suggesting that it’s some kind of structural support that helps to transfer the whole loads from the building to underlying substrate.

Also some compound of stiffened slabs, concrete walls and base (Land) constitute the structural components of the foundation. The exchange of nuclear power through the establishment can be constrained by giving insulation between the inside and outside conditions; notwithstanding, at times the establishment protection is fail to lessen development costs.

If we talk about the roofing system, The Roofing system plays a major part of any house as it keeps complete protection from the bad surrounding conditions like heavy rain, thunderstorm etc.

It is basically made up of shingles on the outer part, which are on the top of tar sheeting as vapor wall or barrier. The composition of the roofing system is so complex.

There is a wood sheathing inside of the tar paper. It should be noted that the upper area in most houses are insulated with fiberglass spray protection.

Glazing is defined as the panel in windows, skylights and doors that let the light pass through

There is no single doubt in this that doors are one of the biggest holes in the housing envelope. Having outer doors that get seal in proper way and enhance the thermal efficiency of any house

Wall Assembly plays a major role in building envelope and important element that completes the support, control and finish function the whole building envelope. The accurate placement for each element may vary between climates and buildings. Some of the elements are found in the wall exterior and interior.

According to the research report, this much amount of people in the world uses building envelope